Skip to main content Skip to search
You are here
DR

Applications for the Children's Summer Camp Wales 2016 are now open.

To apply for a place please complete and return the attached application form. Once places have been allocated you will be sent further details, including a list of required  clothing and equipment.

For over 40 years summer camps have been organised for children aged 9 - 16 from our parishes and communities around the UK.
For a number of years now it has been run on a site in South Wales at Dyffryn Ganol, near Crickhowell in the Brecon Beacons. It is an ideal location for a campsite; a small, flat field nestled in a alley between the mountains. Alongside the field runs a stream where the children can safely wash and play.

If you have any questions, including enquiries about transport, feel free to contact:
Deacon Peter Scorer or:  Father Alexander Fostiropoulos

A limited number of bursaries are available for those in need. The cost does not include transport to and from the camp. Transport to and from the camp is the responsibility of parents. However we will make every effort to coordinate arrangements between families. In previous years at least one leader has accompanied a group of children on the train from London to (and back from)
the camp.

THE CAMP SITE
This is real camping! There are no buildings on the site and everyone sleeps in tents, with up to six people in each. Three large marquees serve as the kitchen, dining hall and activities area, while another holds the chapel where everyone gathers for prayers first thing in the morning and last thing at night. This is also where the Liturgy is celebrated on Sundays and on the feast of the Transfiguration. 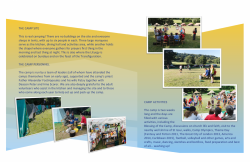 THE CAMP PERSONNEL
The camp is run by a team of leaders (all of whom have attended the camps themselves from an early age), supported and the camp’s priest Father Alexander Fostiropoulos and his wife Patsy together with Deacon Peter and Irina Scorer. We are also deeply grateful to the adult volunteers who assist in the kitchen and managing the site and to those who come along each year to help set up and pack up the camp.

CAMP ACTIVITIES
The camp is two weeks long and the days are filled with various activities, including the Blessing of the Camp, discussions on church life and faith, visit to the nearby well shrine of St Issui, walks, Camp Olympics, Theme Day (Fantasy and Fiction 2011, The Great City of London 2013, America 2014, Caribbean 2015), football, volleyball and other games, arts and crafts, music, dancing, sketches and bonfires, food preparation and best of all... washing up!